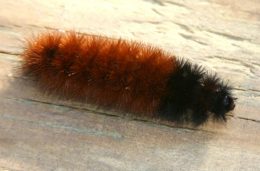 The 39th Annual Woolly Worm Festival was held this past weekend in Banner Elk.  While there are many sources for the winter forecast, including various Almanacs, online blogs, and even some brave meteorologists willing to predict, the Woolly Worm Festival is always one of the more unique sources for what we can expect this upcoming winter.  As is tradition, the color of the Woolly Worm’s segments are used to predict the 13 weeks of the winter season.  A brown segment indicates a mild week, and black a more frigid week.

The Woolly Worm Festival in Banner Elk is where the official Woolly Worm to predict the upcoming season in Western North Carolina is determined.  And how else, but by a good ole-fashioned Woolly Worm Race.  This year, it was Hans Solo from Boone that won the honor.  As can be seen in the picture above, this may not be the best winter for the snow-lovers out there.

More information on this year’s Festival and Hans Solo’s prediction can be found at: http://www.hcpress.com/front-page/hans-solo-wins-39th-woolly-worm-festival-owned-by-young-brothers-from-boone.html

And on the Annual Woolly Worm Festival at: http://www.woollyworm.com/

How Can We Help?

We're here to answer any questions you may have. Click below to get in touch with us.

Click the button below to find out how much oil is in your tank.